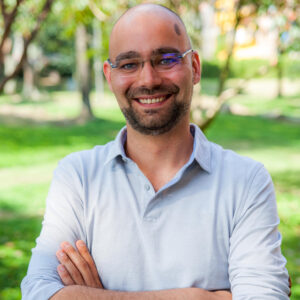 Pablo Calvo de Castro holds a Bachelor’s in Social Work and in Audiovisual Communication and a PhD is Interdisciplinary Gender Studies and Equality Policies from the University of Salamanca (Spain). For more than 15 years he has worked as a producer, editor and director of photography in the field of documentary production for television and as a research professor at different universities. He is the director of photography and editor of 13 documentaries of the documentary series “Los Últimos Indígenas” (2008-2013) produced for Televisión Española. In 2016 he moved to Colombia and in 2020 he directed his first documentary, Palabras de Luz, which analyzes the processes of memory construction through a story shared with the victims of the armed conflict in Colombia. His main lines of research are documentary film as a tool for social change, gender studies and visual anthropology. Between 2017 and 2022 he has been a full-time professor at the Faculty of Communication at the University of Medellín (Colombia). Currently he works as an associate professor in the Department of Sociology and Communication of the Faculty of Social Sciences of the University of Salamanca (Spain). He also develops different documentary and transmedia projects linked to collective memory.