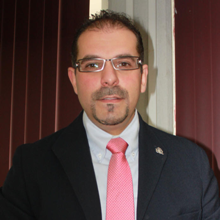 Carlos Muñiz obtained his PhD in Communication at the University of Salamanca in 2007. He is presently lecturer at the School of Political Science and Public Administration at the Universidad Autónoma de Nuevo León (Monterrey, Mexico), where he teaches graduate and postgraduate degrees. Coordinator of the Political Communication Laboratory (Laboratorio de Comunicación Política, LACOP) and academic coordinator of the specialized course on Political marketing and media management, he is a member of the National Researcher System (Sistema Nacional de Investigadores, SNI), level I, since 2010, as well as part of several publishing committees for scientific journals and international research association. He has authored and coauthored numerous publications in scientific journals and national and international books, and has been a member of several research projects financed by CONACYT, PROMEP or the UANL in Mexico, or by the Ministry of Education and Science in Spain.